If it ain't broke, what are you waiting for?

Most adages have a converse. "Birds of a feather flock together," while, "Opposites attract."
Today we take issue with, "If it ain't broke, don't fix it."
The counter-intuitive approach is to break things all the time. I recommend this. Start breaking things or stay in bed until the sheets curl. But here's the trick--constantly break LITTLE things, and enjoy tractable, manageable surroundings. The alternative? Wait for great big things to break themselves. Wait for spontaneous nuclear concussions that level the landscape. Perhaps I should explain.
Passivity seduces. Leave well enough alone. In technology terms, if it's running, don't touch it. Don't patch it, reboot it, upgrade it, replace it. If it ain't broke, don't fix it.

But this sort of stability is an illusion. A router or server with an uptime of 713 days is not a steadfast pillar; it's a lit wick. 713 days? Did we forget about it? Do we not love it anymore? No patch or minor code revision for its birthday?
Windows XP and Internet Explorer 6 running fine?  It may appear so, but that platform encumbrance incurs massive infrastructure debt.  And sooner or later, the piper always demands his wages.
A January 27th TechRepublic article, "Avoid getting buried in technical debt," references debt as it applies to software development, a concept introduced by Ward Cunningham in 1992. We can consider  "Infrastructure Debt" a useful abstract for emphasizing the cost of deferred action, whether it's a lack of documentation, rushed work, or sidestepped upgrades.
Too often we confuse stagnancy for stability. That apparent uptime costs plenty, and once we become cognizant of those costs, we'll realize that "a stitch in time saves nine."
Time to break something.  We'll discuss the details in the coming days.
Posted by Mark at 8:17 PM No comments:

IBM built a computer named Watson to play Jeopardy, and in a trial run Watson beat a pair of Jeopardy champions.  Why would IBM do this?  You might think, as I did, that IBM is in it for the money, given that top Jeopardy champions can bring home over $3 million.  Build a "Wheel of Fortune" and "Price is Right" computer and IBM could dominate the game show circuit, perhaps raking in enough money to stop laying people off. 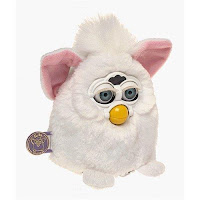 But no, IBM built Watson to achieve breakthroughs in Computer Intelligence and Language Skills.  While machines have been thrashing us at chess for years, the field of Computer Intelligence has been stagnant, with few advances beyond Honda's Asimo robot and Tiger Electronic's Furby.  In 2008, some placed faith in an undefeated air hockey robot, but air hockey enthusiasts soon criticized the robot's "sissy, goal-parked" style of play as little more than artificial cowardice.  WIth Furby sales falling down the charts and Asimo falling down the stairs, the province of game shows, long considered the Holy Grail of Computer Intelligence, seemed forever beyond reach.

Enter Watson, the Great Blue Hope.  Sincere people, many with beards, spent years building a massive computer system that would master the language of Jeopardy. While Watson spent most of his early months muttering email addresses and posting on FaceBook, the breakthrough "pun algorithm" had Watson making unprecedented linguistic strides:
Watson - This type of tea has noodles in it.
IBM researcher -  I give up.
Watson - What is spaghetti?
IBM researcher - Wow!
Watson - This is why the firemen ignored the burning dentist office.
IBM researcher - Why?
Watson - What is, they thought it was a drill.
IBM researcher - Please stop.
Soon Watson's comprehension skills were drawing awed gazes toward IBM, the Geppetto of Silicon.
Watson - What is "I'm a real boy!"
IBM envisions Watson triggering industry transformations and helping doctors diagnose illnesses.  Industry experts, however, suggest the most likely use for this new technology will be improving answering machine services:
TODAY
Human - Hi, can I talk to someone in the customer service departme--
Machine - Thank you for calling. Please listen carefully to the following seventy-seven options, as our menu has recently changed.
Human - 0-0-0-0-0-0-0-0-0-0-0
Machine - For Pool Hygiene Administration, press 001...
Human -  *click*
BRIGHT FUTURE
Human - Hi. Customer service department, please.
Watson - ???
Human - Customer. Service.
Watson - ???
Human - This department is staffed by countless telephone-tethered employees I'm about to swear at.
Watson - What is Customer Service?
Human - Exactly.
We can hardly wait.  The only loser here is, of course, Tiger Electronics.  If only they had given Furby a smartphone with Internet access when he asked for it, the little guy could have ruled Jeopardy years ago.


What do you think of Watson? Breakthrough or Jeopardy gimmick?
Posted by Mark at 4:03 PM No comments: