A woman sitting on a bench

The day broke dank and overcast, not a morning for walking your dog in the park, unless your dog was the sort of chocolate Labrador that, neglecting exercise, would routinely chew the windowsills off the wall during the lonely workday. Your dog, Lolly, is precisely that sort of dog, calmly gnawing your house like chewing tobacco and spitting the moist pulp into piles for your later collecting. Facing the choice between another weekend hammering down fresh molding or walking off your dog's destructive energy,you chose to log-roll out of bed and grab the leash.

The sun, good sport that he is, chose also to rise, casting a meager glow on the damp sidewalks and bedewed grass. Lolly pads along with an eagerness that forces a quickness to your step. She tacitly refuses to acknowledge that this is anything but the most splendidly fabulous morning. The smell of earthy, ionized air, the bracing coolness, a tousling breeze--another perfect day for walking. Lolly glances back at the bobbing leash and then up toward you, wearing a goofy labrador smile. You smile back.

You've arrived at one of the park entrances, taking the fork to the right through an opening in a split rail fence. It's a civilized park, with poured concrete walkways suitable for dry or wet weather, and wide trails with multiple diverging branches allowing for walks and jogs of variable duration.

Lolly has her favorites, the trails with kaleidoscopic animal scents floating throughout the underbrush, but today her broad nose points you toward the center of the park, home to an modest gazebo. An odd choice.

The mist is thicker here, the air cooler, enclosed by woods and spotted with copses, shifting leaves batting away the sun's heat. You are warm enough from the exercise, but the chill clings to exposed skin.

Typically you'd encounter a few familiar faces, though only the diehards on a day like today, the ones wearing modern synthetics and GPS watches. All is quiet this morning, though, the thickness of the air dampening sound, save for Lolly's breathing and the tapping of her nails against the walk.

Lolly's pace slows. She's sniffing the air. "Let's keep moving, girl," you say. There's a schedule to be kept--walk, shower, off to work. You're looking around. Did everyone else hit the snooze button?

You've been to this park a hundred times, know well its twists and shadows, but now this morning you have a dogged sense that you shouldn't be here. Silly. You tighten your grip on the leash.

A glimpse of the gazebo appears ahead. A small structure, perhaps twenty feet across, with a wooden shingled roof, open on the sides save for several benches spanning its posts.

As you approach the gazebo, sun still struggling to burn off the overcast clamminess, you at last spot another person, a woman sitting on one of the benches affixed underneath. An unfamiliar face, even at a distance, but more than that, you are struck with the realization that she shouldn't be here either. 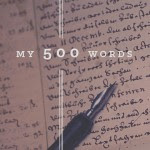